The President of the Hungarian Competition Authority presented the practice of the competition authority's protection of children at a professional conference of the Pest County Government Office in Budapest. Csaba Balázs Rigó stressed that the perpetrators of competition law infringements against children can be charged the most severe penalties possible. 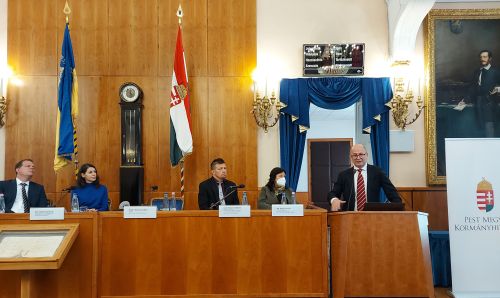 Csaba Balázs Rigó, the President of the GVH, gave a comprehensive presentation at the conference of the Pest County Government Office entitled "Child protection in a different way - state involvement outside the institutional system of child and youth protection" on 19 October 2022. The President of the Hungarian Competition Authority stressed that children, as an easily influenced and therefore vulnerable group, are particularly protected by the GVH and that infringements against them are subject to particularly strict assessment. Csaba Balázs Rigó underlined this by presenting a number of recent cases of the Hungarian Competition Authority, several of which have resulted in significant fines.

The Authority's experience shows that it is not only traditional advertising channels that are facing serious problems: examples of unfair influence on young people are increasingly coming from the virtual world, in line with their growing consumption of content. "The online space is indiscriminately flooded with advertising for minors, which is "no longer" under the control of the parent, but "not yet" filtered by the child." – said the President of the GVH.

In addition to presenting the case law of the Competition Authority on child protection, Csaba Balázs Rigó also referred to the activities of the Family-Friendly Working Group of the Consumer Protection Roundtableof the Ministry of Justice. This inter-professional forum, set up at the initiative of the GVH and involving a number of public and social bodies, aims to strengthen the fight against misleading advertising and unfair commercial practices aimed at families, particularly in the online and social media.

The President of the Competition Authority concluded his presentation with useful advice for businesses seeking to comply with the law. "Instead of loud campaigns promising quick profits and often ending in fines, focus on long-term, quality advertising that delivers a legal return", said Balázs Csaba Rigó, summing up his recommendations for market players. The competition sector's voluntary compliance efforts are supported by the Authority's practice-oriented, detailed guidance is available in Hungarian on its website.